In this interview, Writers.com instructor Rosemary Tantra Bensko discusses her practice of embodied writing, a creative writing process that uses movement exercises to access the wisdom of the whole body.

How did you get interested in the relationship between writing and the body?

Around five years ago, I was reading the new reports that came out about being sedentary—it’s sort of “the new smoking,” as they say.

I’d known that being sedentary was bad, but people seemed to think you could be sedentary, writing a novel for eight hours, and then go to the gym, play tennis, go dancing. But I realized that even if I did those things, according to those studies, it didn’t really make much difference. You have to get up regularly—they recommend every half hour—during any sedentary period. If you do that, then your body can be healthy.

I like to be as healthy as I can, so I implemented that, but I’m quite busy: I’m writing novels, teaching, editing manuscripts, and all these things, and I wanted to use my moving time productively. So I figured I’d combine the two, and train myself to learn how to compose and generate ideas through movement.

And then it worked great, and it tremendously helped my writing process.

What were the main ways you found to combine body movement and writing work?

I like to work on composition through movement. I don’t necessarily know the book I’m going to write; I may have some seed ideas. And so rather than just sitting in this static position with my hands on the keyboard, trying to think like a machine, this disembodied brain—thinking from an inflexible position—I instead wanted to think through a flexible movement position, where I could use the wisdom of all of my body.

Rather than sitting in this static position like a disembodied brain, I wanted to think through flexible movement, where I could use the wisdom of all of my body.

So I would think about, What do I want to write? How do I want to affect the readers? What kind of arc do I want: a Gothic novel that has a positive ending, a Gothic novel that has a negative ending? And I would act it out, and I would find out through acting out the arc and the emotions I wanted to have the readers feel, That’s what I want to write. Whereas if I just tried to feel out what I wanted to do otherwise, I wouldn’t have had as much body wisdom to draw on.

When I describe a character’s gestures and movements, it’s very specific, and it’s real to me, because I’ve acted it out.

And so the character doesn’t talk like other people, and when I describe the character’s gestures and movements, it’s very specific, and it’s real to me, because I’ve acted it out. If they’re tensing up muscles as I’m acting them out, then when I’m writing about them they’re going to be tensing up those muscles, and I may not have known it until I acted them out. So I feel like I’m embodying each character better, and I know what they feel like inside.

I also like to direct—like a symphony conductor—the flow of a book, or a short story or memoir, whatever I’m writing.

And I used to get up and pace regularly. It’s very easy to think while pacing. Then my upstairs neighbor got upset, because he could hear the same motion over and over again. So I started just moving in really erratic ways. It’s really hard to think that way, but I did find that I could change my thought process: if I was stuck in something, moving erratically—and breathing erratically, too— would push me into a new perspective.

And I would vocalize: try to find my own voice, my characters’ voices, the voice of the narrator, and let my voice tell me what I wanted to say. Not just how I say it, but What is my message? and let it come out spontaneously from the vocal cords without thinking about it.

Your embodied writing practices sound so useful. Why haven’t most of us heard of something like this before?

I had never heard of it either. I never knew of anybody doing anything like it. I read one article by a woman named Susan Nordmark, and I actually know her, which is kind of cool—she’s a local writer. She hadn’t suggested doing any of these things, but it was about writing and the body, the relationship. So I knew at least one other person had thought something like that. But otherwise I hadn’t come across anything.

We write just from our minds, and we’re trying to write these stories with full-bodied characters, vivid action, and immersive scenes. We’re trying to do this amazing thing from a very limited position.

But I think now we’ve become so cramped in our movements in our writing that we just forgot that we even have a body when we’re writing. And so we write from our minds, and we’re trying to write these stories with full-bodied characters, and action that’s really vivid, and scenes you can immerse yourself in, but we’re trying to do this really amazing thing from a really limited position.

When I go move around, I’ll look really closely at what’s around me. I’ll remind myself: I’m not writing an abstract scene, I’m writing a vivid scene with all my senses. I’ll slap my skin, smell the air, touch something warm, get all my senses revitalized, so I can then put them in the story.

What has your exploration of embodied writing taught you as a writer?

I feel like I’ve become a much better writer. It’s easier to get the ideas, and I also really inhabit the characters more fully.

I’ve become a much better writer. It’s easier to get the ideas, and I also really inhabit the characters more fully.

So I feel it’s made my writing more granular, and people comment on my writing being extremely granular, very detailed with settings—not overly descriptive and flowery, but embodied.

It’s also been very helpful to learn how to read and edit based on, “How does this writing make my body feel?”

It’s also been very helpful in learning how to read well, edit well, and give feedback to my students based on, “How does this writing make my body feel?” When I think, “What is it that makes me want to read this book?” I ask what bodily changes I’m looking for. How do I feel when I’m partway through, and how do I feel when I’m done? How can we create those bodily effects in the reader?

What advice do you have for writers who are more bound up in their bodies, and maybe nervous about expressing themselves that way?

Start with the tiniest little nuanced motions to get used to it. If you just jump out and start leaping about, you might feel really stupid, but if you just move your hand a little bit, what’s the wisdom within your hands?

I feel like when I’m typing, a lot of my thinking happens through my arms. If I try to record something with my voice, I don’t think the same way. I can’t write a novel trying to dictate it, because my arms are part of my thinking process.

So start with the arms: loosen them up and make them more flexible, so the thoughts can move through them more freely, that’s a good place to start, I would say.

What other advice do you have for writers wanting to work in a more embodied way?

People may have different disabilities or physical constraints. Even just looking with your eyes—looking around different parts of the room—are good eye exercises for strengthening those muscles, but they also remind you who you are, where you are, and that your characters are somewhere.

So often I’ll read all this dialogue where it’s totally bare. You don’t see any expression, where they are in space and in relation to each other. So even just using the eyes is really helpful to bring your writing back into physicality.

If you’re interested in taking the embodied writing classes I offer at Writers.com, I’d say, Don’t be nervous. There’s no expectation that you have to be on any live video calls or anything like that. You can do all your work on your own—nobody has to see you acting weird. I like to dress up as my characters in the videos I record for the class, and I think when people see me being goofy, they can relax: it’s not too serious, no big expectations.

At the same time, there’s also the possibility of really bonding with the other people in the workshop, even just by uploading the writing you’ve done during the course. And of course, if you want to share photos or videos of you dancing around as one of your characters, you can. 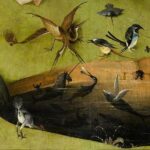