Our 10-week course,
Write Your Novel: The Workshop with Jack,
starts May 15.

"I found the exercises extremely helpful and came away feeling encouraged about my novel idea and excited to continue working on it. Jack was accessible and encouraging and gave excellent feedback."
—Elizabeth Hawkins

If you want to get a good start on a novel in just ten weeks, or revise a portion of a novel you’ve already written, this is the course for you. Give your imagination free rein, move steadily ahead, and count the pages!

Throughout Write Your Novel, you’ll enjoy lectures and material from Jack, as well as encouragement and feedback from fellow students. With their support, you can expect to write up to 3,000 words per week.

By the conclusion of the course, you’ll have a great start on your novel, or a significant amount of revision done on your existing draft.

Taught by Jack Smith, 2007 George Garrett Fiction Prize winner and author of Write and Revise for Publication: A 6-Month Plan for Crafting an Exceptional Novel. 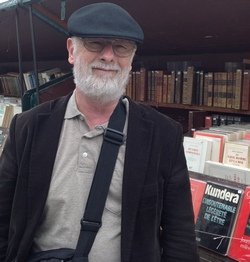 Plan to write up to 3,000 words each week, with helpful, constructive feedback.

Learn from an
Award-Winning Author

Get helpful, constructive feedback from a professional writing instructor with numerous published novels.

Connect with Other
Novelists

Meet with and learn from other writers with similar interests throughout the course.

Move your novel forward with expert instruction, support, and accountability.

If you want to get a good start on a novel in just ten weeks, or revise a portion of a novel you’ve already written, you’ll benefit from taking this course.  Give your imagination free rein.  Move steadily ahead and count the pages!

During the ten weeks of this class, you’ll learn or restudy the basics, get a good start on a first draft or revise part of an existing manuscript and discuss with your fellow writers novels that you find interesting.  Plan on submitting up to 3,000 words each week. You won’t finish a novel in ten weeks but you can write half of a short novel and finish it by taking the class again or on your own.

You should focus on character and story, but each week you’ll be asked to think about another element of fiction as it relates to your novel-in-progress.  If you want to go back and make changes, that’s fine, but the main thing is to stay up as much as possible in order to complete as much of a rough draft as possible in the time allowed.  You can always make changes later.

Built into the course is the final assignment on revision strategies.  Most novelists do more than one revision, so even if you’re intending to take the class to revise a novel you’ve written, you’ll probably need to do more revision.

This is a highly interactive class: you’ll receive feedback at all stages from your fellow writers and your instructor.

Open to beginning as well as advanced writers. The course will work for memoir writing as well.

Week One: Getting started

Start with a primer on the basic elements of fiction and the process of writing fiction.  Write a preliminary outline for your novel. Think in terms of the five-stage plot structure.

Knock out 500 words a day (or revise an existing novel) with your focus on character and story.  Keep your eye out for conflict—for complication and rising action.

Keep going with your story.  Think about making your protagonist more complex.  As you do, your story might make an unexpected turn.

Watch for ways to make secondary characters—supporting characters and your antagonist (if you have one)—more interesting.

Heighten the tension.  Has your protagonist overcome an obstacle?  Look for a rug-pulling or reversal.  It may occur in later pages.  Don’t force anything.  Focus on the difference between narrative summary and narrative scene.

Focus on good prose: exposition and description (of setting as well as character). (Note: if you’re working on the second half of your novel, keep in mind the climax of the 5-stage plot structure. It may occur soon.)

Now focus on voice. Do you like the voice so far? What would it take to make it more interesting?  Is it the prose itself?  What about the scenes—the dialogue?  Is it something about the protagonist?  (Note: if you’re working on the second half of your novel, keep in mind the falling action of the five-stage plot structure.)

Focus again on plot.  Has your protagonist overcome an obstacle?  Look for a reversal, but again don’t force anything.  Look for ways to foreshadow future plot developments and/or echo previous ones.  Don’t engineer anything.  Subtlety is the key. (Note: if you’re working on the second half of your novel, keep in mind the resolution.)

Week Ten:  Develop revision plans for your completed half.

"Jack was very encouraging and provided me with helpful feedback. His comments are friendly but also critical, which is important with writing. The class content was engaging. I've already recommended the class to a friend and will continue to do so."
—Shay Meinecke